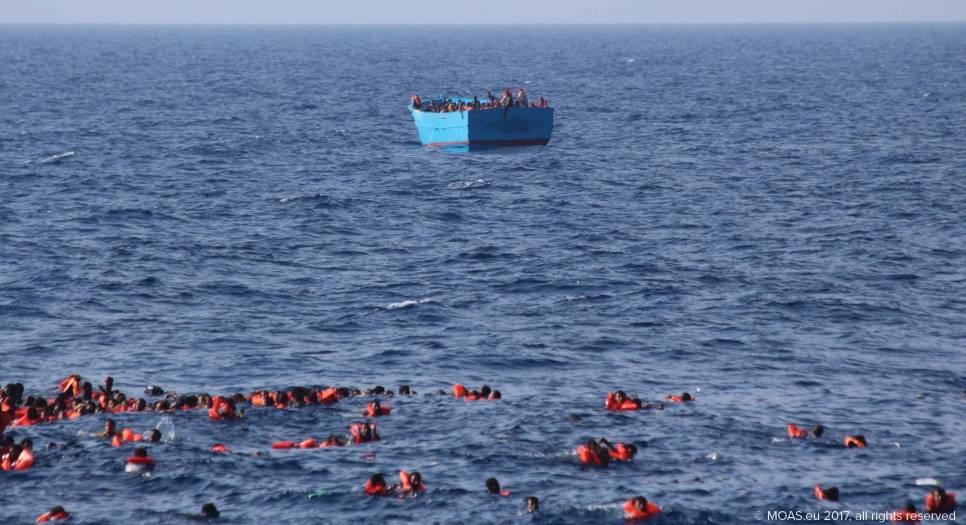 A newly compiled report by UNHCR, the UN Refugee Agency, shows a decline in the number of refugees and migrants arriving in Europe in the first half of 2017. However, without legal means available to them many are still resorting to being transported by ruthless people-smuggling and trafficking networks, risking death, serious abuses, or both.
The report says that overall Mediterranean crossings fell sharply in the first half of this year compared with the same period in 2016, due mainly to a 94% decline in people using the sea route from Turkey into Greece. Meanwhile, crossings from North Africa to Italy have remained at around the same level as last year (83,752 people as of end June, and lower arrivals rates since).
Despite the fall in arrivals, the likelihood of dying among people seeking to reach Europe is still alarmingly high. The report says an estimated 2,253 people died or went missing at sea, and at least 40 died on land routes at or near European borders. As most people travel clandestinely, such information is hard to confirm and these estimates are considered conservative. Violence and abuse along the journey, most notably in Libya, are rife.
“Taking measures to reduce the number of refugees and migrants arriving in Europe, without at the same time stepping up peace-making, development, and safe pathways is morally unacceptable,” said High Commissioner for Refugees Filippo Grandi. “We can’t afford to ignore abuses clearly taking place simply because they happen out of our sight.”
The report says that many of the migrants and refugees who have reached Italy from Libya have survived dangerous desert crossings and abuses that include sexual violence, torture, and abductions for ransom. At sea, the risk of dying en route to Italy is one in 39.
And while many who make the journey do so in search of livelihoods, thousands of others are fleeing violence in their home countries or persecution. Some 11,400 of those who reached Italy in the first half of the year were children unaccompanied or separated from their families. Many arrivals, amongst them children, were victims of sexual violence or trafficking. In all, over 40 percent of asylum applicants in Italy between January and June qualified for protection of some kind.
UNHCR’s report also shows a rise in the number of arrivals to Spain, with 9,500 people reaching the country since the start of January, mainly by sea, compared to the 4,936 who arrived during the first six months of 2016.
On land, movements across Europe continued in the first half of 2017, although at a much reduced level compared to the same period last year. People moving onwards irregularly from Greece and Bulgaria reported abuses at the hands of smugglers, as well as being beaten, and set upon by police dogs. In addition there were reports of robberies, and kidnappings by smugglers for extortion.
During the period of the report UNHCR and partners continued to receive allegations of push-backs by State authorities, including in Bulgaria, Croatia, Greece, Hungary, Romania, Serbia, Spain and the former Yugoslav Republic of Macedonia. There were also reports of access to asylum procedures being denied and allegations of violence in some instances. While some States have taken steps to address such actions, for example through investigating allegations of human rights abuses at borders, the report notes that further measures are required.
The report notes that renewed commitment is needed to ensure protection and solutions, including for those on the move before they reach Libya and concrete steps to address smuggling and trafficking. These measures must be combined with more safe and legal pathways, including increasing resettlement and facilitating family reunification. This is crucial if we want to protect refugees and migrants from criminal networks, reduce reliance on smugglers, and reduce further abuse and deaths.

*The report is available here.