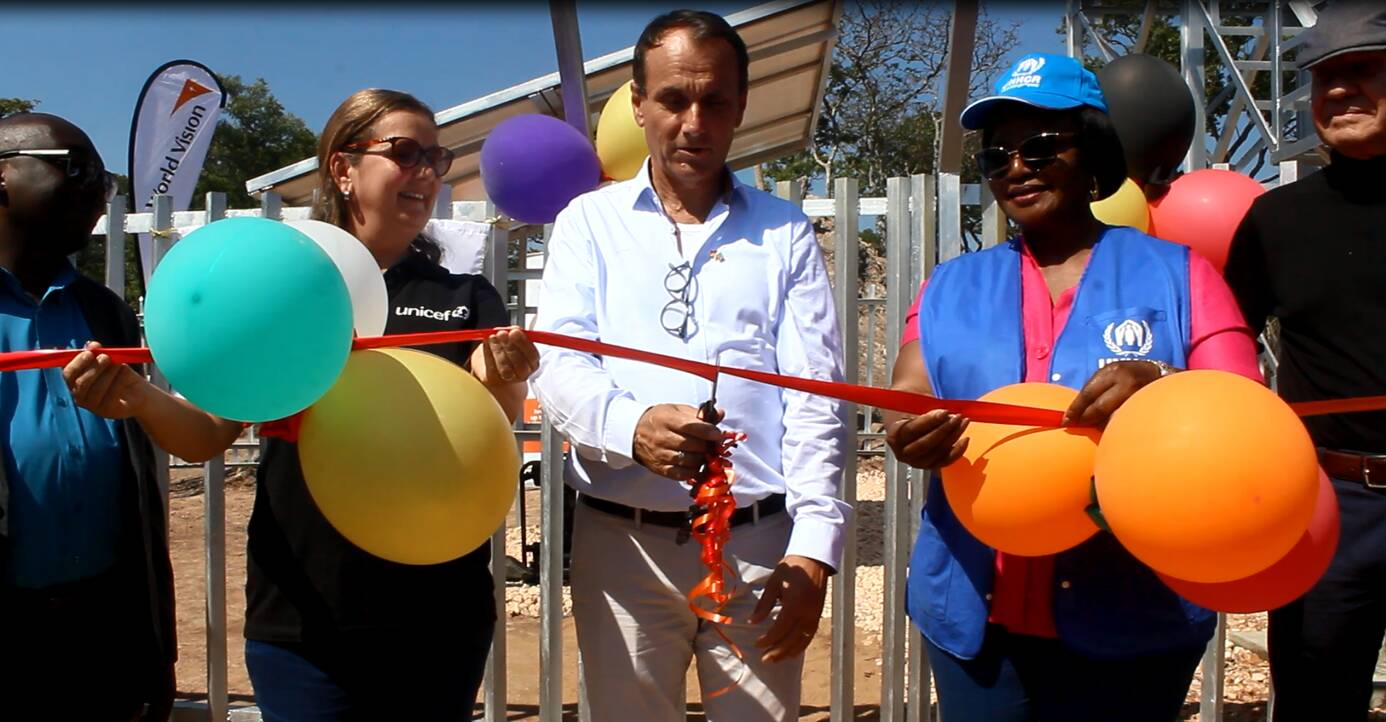 
The Federal Republic of Germany Ambassador, His Excellency, Mr. Achim Burkart has launched a motorized solar water borehole constructed by UNICEF and World Vision with support from KfW Development Bank of Germany for refugees and the Zambian hosts living in Mantapala settlement.
The launch took place when His Excellency visited Mantapala settlement accompanied by the Commissioner of Refugees in the Ministry of Home Affairs Mr. Abdon Mawere, the Head of Development Cooperation Mr. Christoph Ritz, Director of KfW Mr. Stephan Neu, UNICEF Country Representative Ms. Noala Skinner, UNHCR Country Representative Ms. Pierrine Aylara and several staff from the UN, KfW and Germany embassy.
During the launch, the Ambassador thanked the Government and the people of Zambia for their legendary hospitality and generosity toward refugees, the UN agencies, and cooperating partners for taking care of the refugees during difficulty situations.
His Excellency reiterated that his country considers water and sanitation to be among the critical needs of every person especially refugees who are exposed to hard conditions.
“It’s really amazing to see a structure of water like this one built which is so dearly needed for all these people especially children and families,” said Ambassador Achim Burkart. Miriam Mwansa, one of the beneficiaries, thanked the Germany government for assisting refugees with water supply.
“The distance from our homes to the water source is now shortened. Women and girls no longer have to walk long distance to access water. The water is clean, potable and safe and we will no longer suffer from diarrhea diseases like we used to,” she said.
While in the settlement, the Ambassador and his delegation took time to visit the school where he learnt that majority of refugees in the settlement are children who were eager to learn.
His Excellency also visited the newly commissioned permanent clinic constructed by UNICEF under the Central Emergency Relief Funds (CERF) and is now run by the Ministry of Health and was impressed that it had a fully-fledged outpatient department, maternity ward, dispensary, laboratory and the nutrition room.
His Excellency also visited the registration office where new arrivals are biometrically registered in the data system by the Commissioner for Refugees with technical assistance from UNHCR.
His Excellency further visited one of the Protection Help Desks, set up by UNHCR and are managed by UNICEF in conjunction with ChildLine to gather and address various complaints including allegations of sexual exploitation and abuse.
The ambassador commended UNHCR for establishing and strengthening complaints mechanisms to prevent various forms of abuses in the settlement.
When concluding his tour of Mantapala, His Excellency revealed that the 10 million euro (136 million kwacha) funding availed by his government through KfW Development Bank and to be disbursed for two years, to address water, sanitation and hygiene programme gaps is being implemented by UNICEF and World Vision in collaboration with the Ministry of Water Development, Sanitation and Environmental Protection (MWDSEP), for 45,000 refugees, mainly from the Democratic Republic of Congo (DRC), and 105,000 Zambian host communities in four locations: Makeni transit centre in Lusaka, Meheba refugee settlement in Kalumbila district, Mayukwayukwa in Kaoma district and Mantapala settlement in Nchelenge district.
Mantapala settlement, in Luapula province, is currently hosting 14,669 refugees who have arrived in Zambia since August 2017 following a deterioration in the security situation in the Democratic Republic of the Congo.
By Bruce Mulenga