A bank branch in a Dzaleka Refugee Camp – the first of its kind in the world to be set up in a refugee camp is providing banking services and credit to residents, many of who are setting up their own businesses. Read more

UNHCR, the UN Refugee Agency, is working with governments and humanitarian partners in Mozambique, Zimbabwe and Malawi to provide relief to the survivors of the Tropical Cyclone Idai, which struck the east coast of southern Africa on 14 and 15 March. Read more

etu Community Radio hit the airwaves at Dzaleka Refugee Camp in the central region district of Dowa on 7th August, 2018 becoming the first Community Radio to be set up in a refugee camp in the Southern Africa region. Read more

View more
UNHCR COVID-19 preparedness and response in Dzaleka Refugee Camp
Quarantine site where all new arrivals are being quarantined for 14 days undergoing screening and observation before being allowed to mix with other refugees. 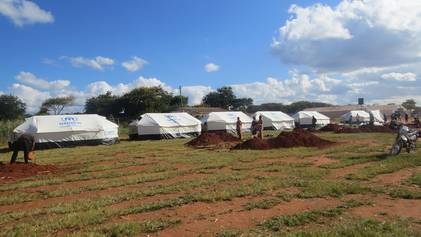 Funding information
$16,200,000
Total appeal
Operations summary
As of 30 September 2020, UNHCR has registered 47, 134 refugees and asylum-seekers. More than half of the refugee population fled from Democratic Republic of Congo (DRC) with the remaining population originating from Burundi, Rwanda and others from the East and Horn of African countries. Most of refugees in Malawi live in the heavily congested Dzaleka Refugee Camp which has 15,154 households located near the capital Lilongwe and was set up in 1994 to accommodate just about 10,000 people. While many of these refugees have been in the country for decades, the situation is not static. Congolese and Burundians continue to arrive at an average of 470 individuals per month. While maintaining open borders for people seeking safety, the Government of Malawi has historically taken a restrictive approach to managing refugee situations by making several reservations to the 1951 Refugee Convention. Its domestic legal framework reflects these reservations and consequently refugees face restrictions on their freedom of movement through the encampment policy, experience limited access to social services and are restricted from employment. The Government of Malawi has already enrolled the Comprehensive Refugee Response Framework (CRRF) despite an Inter-Ministerial CRRF Steering Committee yet to adopt the 5 pledges Malawi made during the Global Refugee Forum and the Roadmap for the implementation of the GCR-CRRF. One of the five pledges Malawi made during the GRF is “legal and policy” reform to ensure some of the 9 reservations, including; the encampment policy, restricted freedom of movement, restricted choice of place of residence by the refugees, access to public schools and access to employment are lifted. Pending the adoption of the five pledges and the Roadmap, UNHCR and its partners, using the Solutions Capital continues to impellent key CRRF activities in the areas of settlement approach, decongestion of Dzaleka refugee camp, livelihoods and self-reliance and advocacy with government on legal and policy reforms/changes.
MALAWI DAILY COVID-19 UPDATE 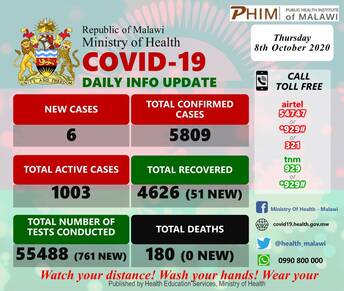