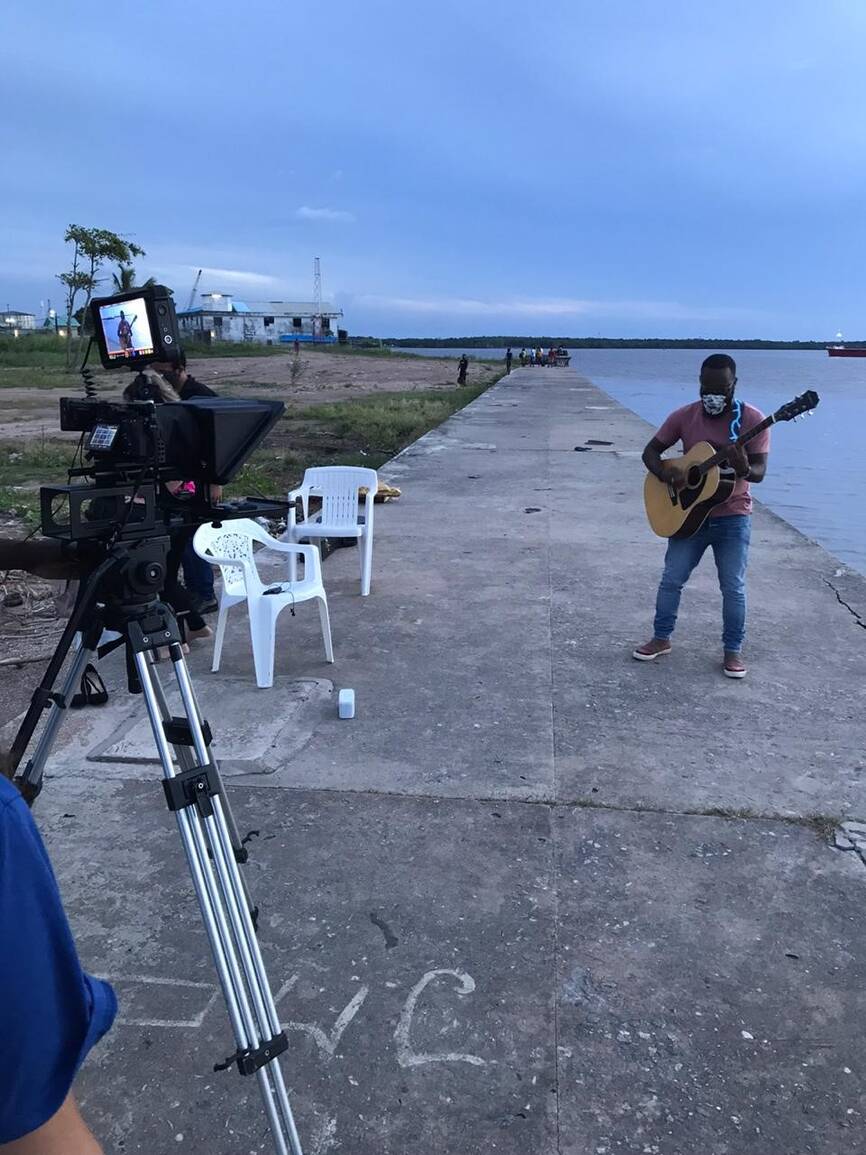 Several days a week, Kelly, a shy 35-year-old Venezuelan musician from El Tigre Anzoátegui State, meets a band of 50 young kids and teenagers for their two-hour music lesson. As they quickly fill the air with the sounds of classical and other modern music, Kelly closes his eyes and listens carefully to the rhythm. They are now playing one of Venezuela’s traditional songs which brings a flood of emotions to him.

“Music enhances culture and gives you tools to be more creative. It does not create barriers, it builds unity,” said Kelly.
Trained in postular and classical music, Kelly was once a member of the youth orchestra in Venezuela before forming part of a music programme, supported by a humanitarian agency that works to assist refugees and migrants in Guyana. From a young age, he learned to play the guitar, the cuatro, the bass keyboard, drums, the mandolin, the violin, the maracas and the cello. In Guyana, he now teaches kids how to play these instruments. “I am bringing cultures together. Integrating the Venezuelan Cuatro and sharing my roots with the Guyanese people who have been accepting of our culture,” he said. In the music school, Kelly works with many displaced children of various nationalities, and others with specific needs. “Music is a powerful tool to support their emotional and psycho-social needs after having left their countries.”

One of the Kelly’s projects is called Soje (Symphonic Orchestra of Jesus), a local Guyanese orchestra school that he created. It is a project to create national system of orchestras, not only classical music but also other popular music. It brings all aspects of music together at the academy to train children and young people to provide society with better cultural development. The initiative also promotes social cohesion, mental health and psychosocial well-being among refugees and migrants and host community members.

During COVID-19, this music programme has been key in helping refugee, migrant and local children to cope with stress and find positive ways to promote integration and solidarity. The pandemic has worsened an already dire situation across Latin America and the Caribbean. Refugees and migrants are among the most vulnerable, who lack access to regular status, work permits, education and medical assistance. Like Kelly, over 5 million Venezuelans have left the lack of basic services and insecurity in their country. 30,000 of them are estimated to be in neighbouring Guyana, a country Kelly holds close to his heart. When on his way to Guyana, he embarked on a small boat, having met the boatman only fifteen minutes before setting off on an uncertain journey to rebuild his life in a home away from home.

Born to Guyanese parents in Venezuela, Kelly had heard stories of a beautiful land filled with hidden treasures all around and found in its people a welcoming environment. He no longer thinks of it as his parents’ homeland. “This is now my land and there are many things that I still need to learn,” he said. For Kelly, the most rewarding thing about being part of the project is to be able to give something back to the people that opened the doors for him, especially in a field he is passionate about. “Teaching music is not just teaching, but preparing the next generation to grow as human beings, spiritually. It is a great challenge, but it is also a blessing to share with them.”

This English-speaking country in South America has given Kelly a chance to contribute and to rebuild his life in the meantime. Soon after beginning his job as a teacher, he was able to bring his wife and children to join him in their new home. He continues to look forward to breaking barriers, and helping his learners to be more supportive, wholesome persons, who search out unity and integrate in a positive way.

He maintains his lifelong philosophy that music is one of the most powerful tools. For Kelly, music is food for the soul that helps people from different walks of life to unite into one common society, and he is optimistic that it will have the same powerful and positive impacts on his students as it has done for him.